This is another book in the long list of “I had a succesful ted talk and subsequently got a book deal because this can be milked for more money“. I haven’t read a lot of books on that list, even though I bet many of them are good. But I saw this on some “recommend” list and it fit with things I’ve been thinking about lately, how we make money in an unconventional career path and how that making of money both comes from and creates our platform.

Although my main conclusion after reading this is that Amanda Palmer is a really cool person. Just, honestly, a really cool person. It’s not neccessarily the highest form of literature, it didn’t blow my mind with its language or structure, but it is what it’s supposed to be: her honestly sharing her story.

She starts by talking about the days when she worked as a living statue, how she bought a second hand wedding dress, painted her face white and with weird doll-like moves gave flowers to people who gave her a dollar. She talks about those brief exhanges when she got to look someone in the eye and give something to them, and how people cried, or laughed at her, or proposed.

It becomes the skeleton of the whole story. Those honest meetings, and the exhange that happened. And the flowers. When she started touring with her band she taped flowers to her piano stand to hide how ugly it was, and then she threw those flowers out at the audience towards the end, and they gave them back to her, or bought her big bouquets.

My favourite story is about when she finally got signed. Her label wanted to market her band, but there was conflict that happened when her fan base grew too fast. It was an echo system, she felt, that would be ruined if too many people were added all at once. It had grown organically, someone bringing a friend, someone hearing or reading about them, and then people one at a time being added into their culture.

She was inspired by some Irish band she like in her youth, where their whole fanbase was like a family. They didn’t have tons of fans everywhere, but they always had someone. When they visited her home town in America she let them stay in her house. And she started growing those relationships herself. Signings were not guarded by security waving people through as fast as possible. Instead people brought her food and medicine when she was sick. People met and fell in love while waiting in line. Their relationship with fans meant couchsurfing instead of hotels when they were touring.

And with the lable, there was suddenly a marketing team with a different approach. They always wanted to reach out to new people. Especially when she had a new album or tour. Instead of letting the music be a gift to the community she had, they focused on the people who didn’t yet know her.

It’s fascinating, because I think we do that a lot. Share things online to grow an audience, subconsciously addressing it to the followers we don’t have instead of serving our already existing community. But that’s not how you build a wave. You bring whatever you have to the audience you have and you bring people into that. Then you watch it grow and cascade, out to the rest.

And that led Amanda to crowdfunding, to twitter, to using and developing her connection to her audience, and paying attention to the people that care instead of screaming for attention from the people that don’t, anyway. 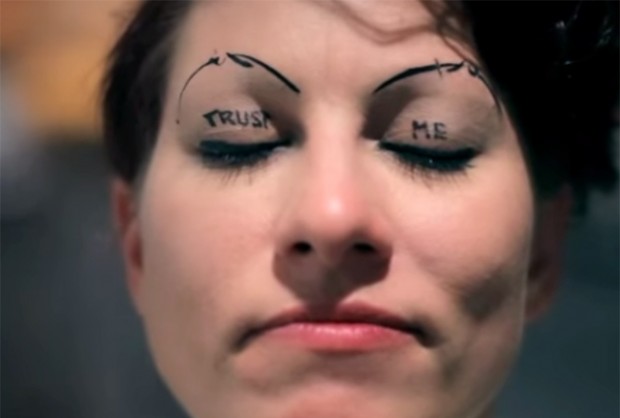 Amanda Palmer, with her weird eyebrows, that she says makes people look into her eyes.